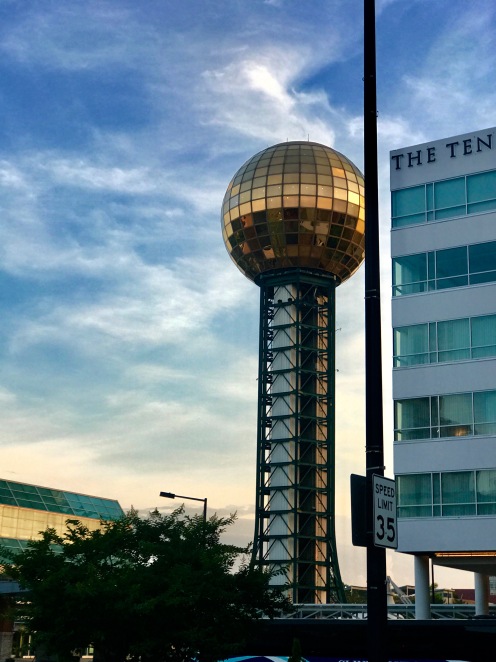 The alarm went off this morning at 8:30. I pretended I didn’t hear it. I was exhausted after our day-long ride the previous day, plus all of the anniversary-ing. Scott really knows how to party.

I was dreading today’s ride because I knew it was going to be a long one. And the temperature was just shy of Satan’s armpit. Needless to say, we spent a little extra time in prayer this morning before heading out. You can see from the picture below that it helped immensely. 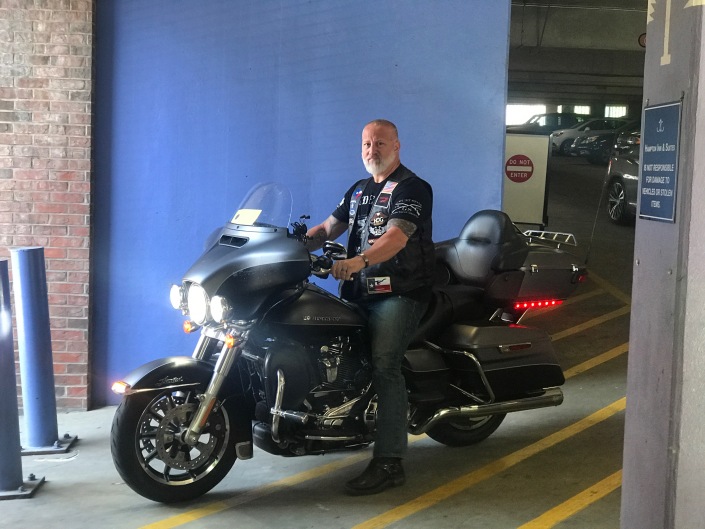 That’s Scott’s, “How do I get out of this?” face. Don’t worry. He figured it out, and we loaded up the bike and prepared to make the long trip to Knoxville. We made this video. I still wasn’t quite awake.

As I’m prone to do, I like to have a plan for the day. Before we were struck down with contractors and sickness, I had the most beautiful schedule ever created. I had routes mapped and hotels booked. I was still able to use some of my hard work, but I’ve had to make a plan on the fly the last few days.

The first leg of the journey took us to Shiloh Battlefield National Park. Once we got off the highway and into the park area, there was a nice breeze and ample cloud cover. I said a lot of, “Thank you, Jesus,” when those clouds came over. Because it was hot.

We made our way toward the visitor’s center so I could reprogram the GPS to take us to our next destination. When we got off the bike, I noticed the cemetery just across the way from us. I decided it was worth a picture since we’re sharing our adventures with you. Scott told me he wasn’t waiting.

So of course I walked across the parking lot and down a little slope to take this picture. 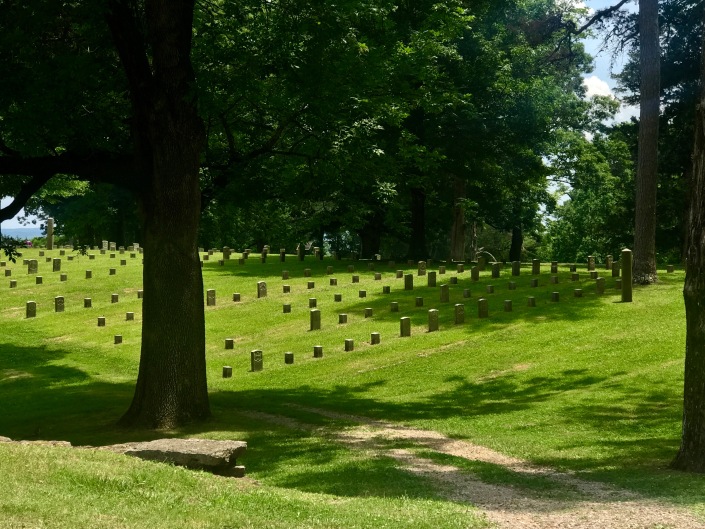 It took less than two minutes, but when I returned to the parking lot, the sound of the motorcycle was already in the distance. One of us thought that was hilarious. I was not the one.

Because I’m not a dummy, I went into the air conditioned Visitor’s Center and waited for Scott’s return. You’ll be glad to know he did return, but what he didn’t realize was that he’d re-started the GPS I’d programmed for our next destination.

An hour-and-a-half later, I realized that something wasn’t quite right with our location, but by then it was too late to turn around and make it to our next stop. I’ll confess I was aggravated, hot, and hangry (because it was after 2:00 and we’d not had anything but water all day).

This is a picture of Scott AFTER we ate. We were both in much better moods.

We made an executive decision to just get to Knoxville as quickly as we could, and abandon any and all backroads and scenery the rest of the way. So we set out on the remaining four-and-a-half hour trip.

(After I had my Big-Mac the clouds came again and the temperatures cooled, so the smile came a little easier).

It was a gorgeous ride, but there was nothing better than finally seeing the Knoxville skyline. We’ve both been to Knoxville before, but I somehow missed the fact that they have a mini Reunion Tower. (For those of you who aren’t from Dallas, it’s the big ball in the Dallas Skyline)

We checked into the hotel, showered, and went down to the restaurant to grab a bite to eat (and have dessert). Scott took a picture of both of us together in the elevator, but I didn’t look good in it, so I vetoed posting it for this blog.

The next couple of days we’ve got some more laid back mountain rides ahead of us as we head into Asheville, North Carolina. The important thing is we get to sleep late in the morning, so don’t text us early, okay?