I was crossing a highway in south Louisiana following the blessing of the fleet ceremony about two years ago. Stopping to say hello to the deputy directing traffic I heard a conversation between he and another person I did not know.

They were talking about exercise, and I naturally jumped in. We continued our conversation while walking off the highway leaving the deputy to his duties. Within moments, the conversation turned to Christ.

He was on fire with the Holy Spirit and I could sense God’s passion in his words. He introduced himself as Bill. In my dress uniform, I laughed and said well it’s easy to guess who I am, while pointing to the name plate affixed to my uniform.

I was captivated by the conversation and we immediately became friends. Later, he introduced himself as Congressman William Cassidy. Now realizing he would soon be representing our area due to redistricting, I thought how amazing!

How amazing to have a humble, unassuming Christian leader representing me in Congress.

His elected position is not what binds us as friends. It is the bond between Christian Brothers who are purposefully introduced by the Holy Spirit. Whether he continues in elected office or returns to a life of service in other fields, we are friends. My prayers for him are unconditional and non-dependent of stature.

We pray for each other more than we speak with each other. When we greet, I hug him and say “I love you Brother.” I heard him profess during a ceremony about someone who admitted their initial doubts about his service in the newly redistricted region. 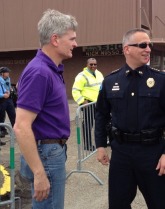 He could have replied with a condescending Congressional “I told you so,” but instead sincerely referenced Proverbs 27:6; Better are the wounds of a friend, than the kisses of an enemy.

Since I have known Bill, we have yet to speak of politics. Each occasion begins with an embrace between brothers, and sharing the joy, struggles and redeeming power of Christ. I am blessed to know Bill Cassidy and thankful for his God-fearing leadership in our nation’s capital.