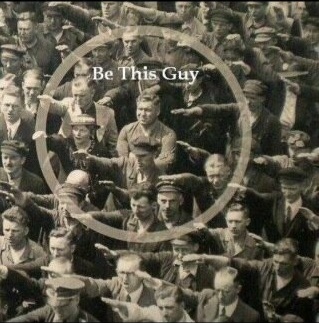 “Courage is being scared to death…and saddling up anyway.” John Wayne

I first saw this photograph a couple of years ago and was struck with a sense of sadness for the man in the circle. My imagination swept me into believing the worst of fates for his non-compliance.

I put the picture aside, and every so often would come across it again. While I wanted to cheer for his refusal to cave, I still suffered from the sadness of his assumed inevitable fate.

A few weeks ago while attending services I listened intently as the spirit-filled pastor spoke about Daniel. He was on fire with conviction as he described the dire situation of the lion’s den. Yet Daniel had a faith beyond that of his own ability.

This guy. This guy in the middle, who has caused me such concern was in his own lion’s den. The irony is that he was actually surrounded by sheep who forfeited themselves for the false hope of being spared.

Look closely and you see not just his posture differs from his peers, but the look on his face shows a peace, maybe even a smile. A confidence against all conventional wisdom that his lions’ mouths will be closed shut against him. Who are your life’s lions?

Sometimes it’s tough to be this guy.

When someone launches a rumor with “Somebody said,” but you know differently; be this guy.

When everyone is sitting around the office complaining about this and that; be this guy.

When everyone decides it’s easier to go this way instead of that way; be this guy.

When everyone laughs at the person to avoid being laughed at; be this guy.

When no one agrees with your passion, vision and faith; be this guy.

It is tough to be this guy, but consider the alternative.