CHANGING the CULTURE and HISTORY of POLICING; PART 2

This is a two-part series about the needs, challenges and promises for revolutionizing the profession of policing.  We have performed brilliantly at times, and with an openness for improvement, we will be brilliant always.

CHANGING the CULTURE and HISTORY of POLICING

This is where the executives become increasingly interested.  There are zero additional expenses associated with the implementation of the DDACTS (Data-Driven Approaches to Crime and Traffic Safety) philosophy, strategy or tactic. Officers already assigned to Patrol are, or should be in these areas anyway.  Reallocate their assignment to specifically target the hotspot.  This assignment should include the days of the week and hours of the day illustrated through your mapping technology.

Proactive officers with no direction usually end up at internal affairs.  The same officers provided a scientifically quantified and justifiable geographic assignment based on the micro-place and micro-time analysis of data usually result in significant reductions of social harms associated with crashes and crime.

A commitment to working smarter than hard requires the optimistic leader to exit the traditional reactive paradigm of running from one call for service to the next.  The “fire brigade” method of extinguishing small fires after small fires is not consistent with efficiently managing the resources entrusted you.  By allowing your analyst or the 27 year old gen-X’er to geocode CAD and RMS data onto a jurisdictional map, you gain an overarching perspective of crime and crash challenges plaguing your jurisdiction for years past and to come.

There are numerous non-cost prohibitive resources available to law enforcement agencies.  My cohort and current president of the IACA, Christopher Bruce claims, and then demonstrates that approximately eighty percent of the tools required for conducting quantitative data analysis are available within a basic Microsoft office suite.

My agency uses an off-the-shelf software, CrimeReports.com for delivering a web-based mapping capability with public consumption applications. Positioned on our department website, and an accompanying smartphone app, this acquisition also allows for a command central component accessible by every employee for generating series of maps, data charts, trend tracking graphs and other tools capable of making every employee a data analyst.

Kernel density maps illustrating statistical hotspot before and after treatment.

The National Institute of Justice provides a free software download for CrimeStat III, and when combined with the power of GIS generates a level of sophisticated analysis promising police agencies the upper hand in battling social harms.  These examples are just a few of the unlimited resources available to law enforcement and deliver a mechanism for breaking from the traditions of the reactive tithing system. 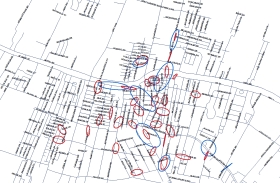 Nearest neighbor hierarchical ellipses map illustrating patterns of crashes in red and patterns of property crimes in blue. Hotspots are identified where the two overlap.

History is great when teaching about our nation or sharing the customs of one’s family and culture.  American policing has evolved through the political, the professional, and the community policing eras, and now stands at the horizon searching for the next direction.  Never has data been so available to the policing profession.

The irony is that we, by trade are documenters of fact, and those facts (data) are held hostage inside CAD and RMS systems.  Despite the captured data, we fail to access, analyze, disseminate, and create actionable enforcement items based upon it.  In effect, we fail the communities served.

I challenge you to learn from the history of policing, but not repeat it, and explore our fraternal origins of reactive service, but not practice them.  As the leaders of our nation’s committed and capable officers, I encourage you to consider the application of data-driven practices; to refuse allowing one more shift to conduct directionless patrols; and to stop enforcement activities determined on the intuitive biases of race, socioeconomic or political entitlement.

Do you hear the hue and cry?

Learn more about this article here:

I wrote this article for Law Enforcement Today in 2012, and want to share it with you today.